Outcomes of the OK Drill

Benefits of the OK Drill

This simple, yet dynamic, drill provides opportunities to create and enhance teamwork, communications and leadership. Ojai Valley CERT contributes the success of our organization's growth and development to the first Ojai OK Drill held on 9/17/08.

This is how we do it!

Now that the Ojai OK! Drill (held October 14th, 2009) is concluded, I've had some time to reflect on what was accomplished and achieved. The following are behind-the-scenes detail which recognizes (both volunteer and government) those involved in creating a dynamic Disaster Preparedness & Communications exercise for The Ojai Valley.

Within one hour, search teams had: met at assigned rendezvous points; counted pre-assigned search areas looking for OK Signs; and communicated, via Ham Radio, the results to the Ojai Police Department (Emergency Operations Center for Ojai). The total count was 944, up from 700 in 2008.

Residents of The Ojai Valley

It cannot be said loudly enough that the Ojai OK! Drill is not possible without the support and participation of Ojai Valley Residents. The signs provide Emergency Preparedness Information which is useful for ongoing discussions. The action of displaying the OK! Sign is paramount for a successful communications exercise.

OVARC (represented by Wayne Francis (W6OEU) and Tom Sullivan (W8MKL)) was responsible for programming the AM 1610 Radio message announcing the drill.

Supervisor Steve Bennett has been a huge supporter of the Ojai OK! Drill from its inception in 2008. His office has provided: OK Signs (in both English & Spanish), instruction sheets, inter-agency support from Cindy Cantle & Brian Brennan, and web-space for communications and file downloads.

Ojai Chief of Police Captain Chris Dunn coordinated and requested CalTrans to install two flashing road-signs (Arnaz Grade & Dennison Grade) that advertised the drill's date and time). Capt Dunn was also present in the EOC's Ham Radio Command Post for the duration of the exercise. We appreciate the effort - one of the CalTrans road-signs was requested to be relocated from Los Angeles County.

Ventura County Fire Chief Bob Roper was present during the exercise showing his support. Battalion Chief Ranger Dorn observed the communications effort inside the EOC and was impressed with our results and coordination.

Help of Ojai provided the "Little House" space for our post-drill discussion. Brian Brennan (KJ6BXO) relayed status updates between the EOC and the various government officials inside Little House.

Special note to Ken, who has provided much of his own capital in laminating hundreds of Ojai OK! Signs for Mira Monte and has linked several residential parks together using FRS radios.

At 7PM local time, they performed an emergency drill with 112 homes being informed of the drill; 78 reported that they were "OK". This is a rate of 69.64%. Counts were completed within 30 minutes by radio to their EOC. Communication was relayed via email from Roger Kehr (Emergency Coordinator for CottonWood, Utah) via email to Paul Garth (Ojai Valley CERT).

Ojai Day, while held after the drill, was well supported with 16 members of Ojai Valley CERT providing information (and laminated Ojai OK! sign upgrades) at the CERT booth.

Thank you to everybody - it would be infeasible to mention everyone by name - for your support and efforts in the 2009 Ojai OK! Drill.

Ojai Valley CERT are thrilled to announce that the Ojai OK! Drill is now an official annual event - held each third Wednesday of September beginning at 7PM.
Posted by Paul Garth at 10:09 PM 1 comment:

Ojai OK! Drill in Blog -- In Case of Emergency Blog

My new friend in the Blogosphere (John Solomon), is the author of the popular Blog -- InCaseOfEmergencyBlog.com

He recently wrote an article that does a great job summarizing what the Ojai OK! Drill is all about.

Please go to: http://incaseofemergencyblog.com/2009/10/08/ojai-ok-youre-ok-so-communitys-ok-readiness-drill-involves-public-cert-responders/
Posted by Paul Garth at 5:56 PM No comments:

Ojai Valley CERT makes additional efforts by laminating OK Signs before distribution. The results are more durable, reflective and permanent signs which will be preserved between drills/incidents.

Check out this photo of another laminating operation at Mira Valle Park in Ojai headed by Ken Williams (seated) -- 5 laminating machines going simultaneously!! 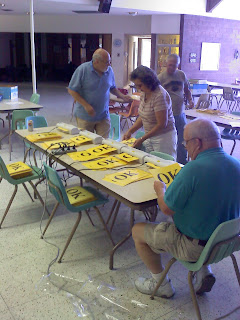 Posted by Ojai Valley CERT at 4:02 PM No comments: